2020: A record year for the Nantes Digital Week!

Audencia is proud to have participated in the 7th edition of the "Nantes Digital Week", which took place from September 17 to 27. 10 days rich in discoveries and innovations: conferences, discovery workshops, new applications...

For this edition, 105 events were organized for the general public and professionals, bringing together 235 contributors. This year's theme: bringing us closer together through digital technology. "2020 is a record year! "said Francky Trichet, Vice President of Nantes Métropole in charge of innovation, digital and international relations. "In 2014, we only had 65 contributors. The Nantes digital family is growing and diversifying.

The festivities began at the Atlantic Campus, on September 17, 2020, with a conference on "Artificial Intelligence: security issues and moral dilemmas. " led by Bertrand Venard and co-sponsored by the Institut des hautes études de défense nationale (IHEDN). This was followed on September 18 by an interactive discovery workshop on cybersecurity, led by Bertrand Venard and Emerson Gautier and co-sponsored by the Kervegan Institute. On the same day, at the Mediacampus, Phillipe Mairesse and Catherine Morel presented "AffinCity": the application that gives you back the keys to your city": an innovative concierge service.

On September 21, 2020, a conference co-hosted by Kathleen Randerson on the subject of "Humans and digital transformation: role of the HR function? "was organized in blended format. On September 23rd, at the Atlantic Campus, a conference was held by Redouane El Amrani and François Constant, co-facilitated by Axys Consultants. It provided an opportunity to discuss "the uses and practices of artificial intelligence in Purchasing and Supply Chain. »

Finally, Marie-Odile Lhomme, Director of Digital Transformation at Audencia, led a workshop on the theme "Containment: Opportunity for Acceleration or Operational Nightmare for Digital Learning? "during the "Virtual walk around Digital Learning" evening held at the Mediacampus. This evening was piloted by the EdTech Grand Ouest cluster & co-ported by members ENI Service ENI_eLearning, the University of Nantes and Pitangoo & ESB.

If there is one city that has understood the challenge of digital transformation, it is definitely Nantes! 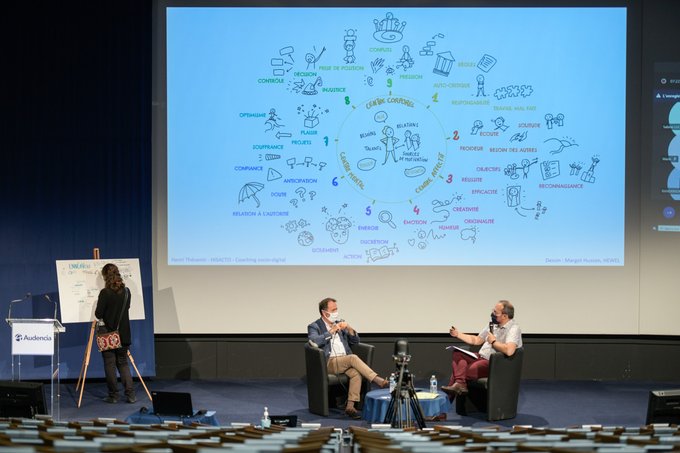